Black Friday and Cyber Monday: how advertising and social media can affect results

Pioneered by Wal-Mart owned Asda, retail phenomenon Black Friday came to the UK for the first time for many retailers on the 29th of November. By offering discount sales, price-matching and never-been-seen-before deals, retailers aimed to recreate the unmitigated shopping frenzy we have now come to expect every year in the U.S.

Black Friday, a tradition in the U.S.A the day after Thanksgiving has never really taken off in the United Kingdom. However, this year advertising campaigns and media attention was ramped up in a bid to encourage more shoppers to take advantage of bargain prices.

Online retailers Amazon and ASOS took part in the event alongside high-street stalwarts Asda and John Lewis. Reactions were deemed positive with large amounts of shoppers flocking to stores and even queuing to enter some before opening.

Furthermore, some of the frenzy now obligatory in America was reproduced here as a woman in Belfast was reported to be injured in a ‘stampede’ whilst many other minor skirmishes were reported on social media.

It seems that increased media exposure and recognition for Black Friday did have a positive financial effect with John Lewis reporting their best ever online sales on the 29th and announcing overall sales of £147m for the week.

Black Friday leads to Cyber Monday, a date in the calendar more UK residents will be familiar with. Cyber Monday falls on the first Monday in December which is supposedly the busiest day of the year for online shopping.

This year £500 million pounds was expected to be spent and the demand and traffic had an adverse effect on RBS and NatWest, with online services crashing and in-store card payments failing, causing many shoppers to miss out on large savings.

Black Friday and Cyber Monday may be deliberate and unapologetic marketing ploys but their success, especially across the Atlantic, speaks for itself. The unofficial launch of Black Friday in the UK can most certainly be regarded as a success. The number of shoppers and high amounts of money spent can be attributed to increased advertising exposure and social media buzz.

As Black Friday looks set to become a date in the UK diary for years to come, this example reinforces the idea that when offers and deals are available, there is a receptive audience out there who can be effectively mobilised through a combination of advertising and effective utilisation of social media. 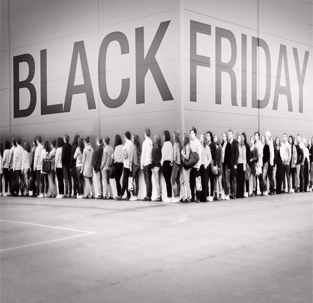